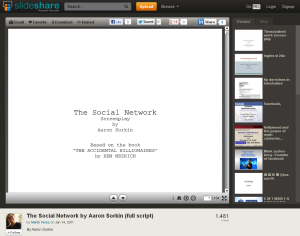 I now have three favorite movies. In no particular order, they are:

The Breakfast Club. “Brian, this is a very nutritious lunch. All the food groups are represented.” Or: “So it’s sort of social. De-men-ted-and-sad, but social.” Classic. A million great moments. Like Lord of the Flies, but hip and with less bloodshed.

The original Rollerball, a William Harrison screenplay produced and directed by Norman Jewison in 1975, is set in a future where national borders and governments have disappeared, and the world is ruled by corporations in megalopolises such as ‘Houston: Energy City’ and ‘Chicago: Food City.’ Mankind has long since abandoned military war, more recently endured a series of Corporate Wars and has now coalesced around an ultra-violent sport that has taken the place of all war.*

One of the film’s most intriguing characters is Zero, a supercomputer that holds the sum total of human knowledge. Lead rollerballers Jonathan E. (James Caan) and Moonpie (John Beck) approach Zero seeking information about the Corporate Wars, but are unable to penetrate its mysterious watery database to find the answers. Sadly, those who control Zero have erased, in some cases, entire centuries of knowledge to cover up inconvenient truths. As I wrote in one of my recent Stratecast reports, I doubt Jewison, Caan and their cinematic colleagues realized it as such, but this movie, now nearly four decades old, shone a light on best practices associated with Big Data and analytics—through a computerized character that violated every one of them.

Probably no surprise that someone who could distill Big Data out of the movie Rollerball would include The Social Network in his current theatrical triumvirate. I think we all see ourselves somewhere along the fun yet terrifying, slip-and-slide continuum of social and business structures flashing across nearly every scene. We are at first enthralled at our fly-on-the-wall stolen (there’s that word) glimpses of the wrenching, anesthesia-less birth of one of the most important social phenomena of our time. Then somewhere deep within our souls, we stir fitfully in the night wondering what multibillion-dollar idea we ourselves may be leaving on the table. Or whether life is passing us by. We’ve all been a part of groups where friendships and alliances wax and wane with the phases of the moon, but here, membership was for all the marbles.

Somewhere between Jesse Eisenberg’s riveting, haunting, warp-speed Zuckerberg and Andy Samberg’s nervous-laughter-emitting version at Harvard I caught glimpses of…myself. (Update my status to legally insane.) Those charming moments of heated discussion when I’m in that “These are the facts these are the only facts and they’re the same facts today as they were yesterday so I’m amazed that you’re here wasting a single brain cell considering even for a nanosecond any other facts” zone.

It’s a zone those closest to me have come to know and love, or tolerate, or for all I know have taken to stealing away (there’s a form of that word again) for a little target practice with a high-powered weapon, biding** their time until The Big Day.

Anyway, while I’m still around I decided to have a little fun with it. Yes, I do like the current tag line on my MarketPOWER+ portfolio and branding site: research, writing, digital marketing, products & analytics at the speed of business.™ But I’m starting to warm to the idea of a new tag line for that rapid-fire, drive-you-out-of-your-mind me:

Yep, those closest to me get all the insanity but not the centuries of financial security.

I hope you like the new personal tag line. Anyway, get on board with this, man. You know, I don’t know what else to say. ◊

*   The 2002 remake of Rollerball simply, for reasons too many to list, does not exist.
** Biden?
◊  Cannot believe Aaron Sorkin posted his entire script for The Social Network right there on Slideshare for all to see, but there it is nonetheless. Enjoy. And thank you, Aaron, for giving us a gift of epic proportions…again.

2 thoughts on “Manic like Zuckerberg but without the billion$”